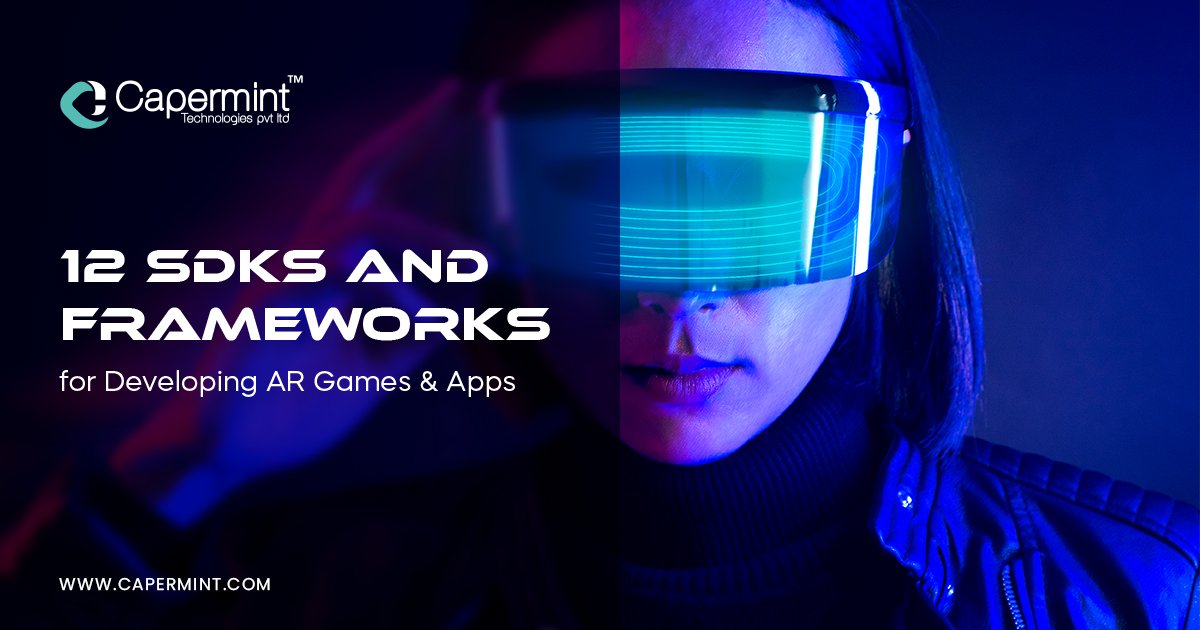 Augmented Reality or AR (in short) is a thriving technology that bridges the gap between the reel and the real world. It makes our fairytale fantasies or science fiction fantasies real.

According to the Statista portal, the global market for AR (Augmented Reality) is expected to attain $18 billion by 2023. There are various SDKs and Frameworks that can be used for AR development, however, choosing the right and the most advantageous one is the issue.

What is AR SDK?

An Augmented Reality SDK is a core technological software that provides the developers with the necessary tools to develop Augmented Reality apps and games. They perform the important task of fusing real-world information with digital content.

AR technology is an emerging one, however, we have just scratched the surface of what AR is capable of. Till now, we have used AR to its minimum capacity and its usage in the apps/games is limited. Let’s have a look at how the existing apps are using AR.

In Marker Based Applications, the camera will use a kind of visual marker to recognize the objects at which you point the camera. It will show you the information of the object in a 3D version or it can be used to measure the size or distance of the object.

These kinds of AR apps function without markers, and the position of the user is detected by an accelerometer that is GPS or a digital compass. This overlays the real objects in the real physical environment. The most popular location-based augmented reality app is undoubtedly Pokemon Go.

In this app, a notification is sent to the user depending on their current location to get them the new real AR content in their surroundings.

Vuforia has extensive options of the latest features and is adopted by most AR users. It is very useful for apps that need to effortlessly combine real images and virtual ones. Vuforia offers a range of products to develop unmatched AR experiences such as Vuforia Engine, Studio, and Chalk. It is supported by iOS, Android, and Universal Windows Platform. ARToolKit is one of the most popular open-source tools, and it offers a list of great features such as dual-camera support, the ability to create real-time AR apps, Unity 3D support, and GPS support. It is a simple, yet very effective framework to develop real time AR apps. This tool supports platforms such as Android, iOS, Windows, and MacOS. Wikitude is the recently launched SDK7 that can support various locations and maps. Its tool is supported by various devices such as Android, iOS, and Smart Glasses. Initially, it was launched to create only location-centric experiences. However, after a few years, Wikitude SDK was launched with features like geolocation, tracking, image recognition, etc incorporated. Wikitude is a paid app that has multiple monthly and yearly plans for its users. SDKs of MAXST – 2D SDK and 3D SDK, respectively, for image tracking and environment recognition. Packed with a range of useful features, Max comes with cross-platform development compatibility with Android, iOS, Mac OS, and Windows. It offers a free version and also supports a subscriber version which is a paid version. Apple has introduced its own AR kit with iOS11 at the time of the Worldwide Developers Conference of Apple in June 2017. This app is supported by various devices of Apple and their iOS versions. It can run on any device that is equipped with an Apple Bionic A9 chip or higher. It is a unique SDK that allows the developers and designers to create an unparalleled AR experiences for iOS devices. AR Core is an SDK designed by Google. It benefits from several APIs that allow it to recognize, analyze, and interact with the environment. Google AR Core is even capable of detecting movement, size, and location. It can also detect and estimate the light conditions of the place. It allows the developers to create rich and immersive AR experiences for Android as well as iOS devices. Easy AR is an AR SDK that can be used to develop AR apps and games across various platforms such as Android, iOS, windows, and more. It can also be used for Smartglasses. It is available across two-tier pricing packages that are equipped with enhanced APIs and increased compatibility. Easy AR Sense is a standalone SDK that provides data flow-oriented component-based API without being dependent on tools and frameworks. In partnership with xlSoft, Kudan offers a free SDK for indie developers. However, a license is required for small and medium scale businesses. The SDK is an effective one to develop marker and markerless AR apps and games. Kudan AR was used to develop the mixed reality app – Nippon’s 24-hour television. Onirix is an AR SDK that offers effortless AR game and app development. The SDK offers a fast and intuitive development experience and is packed with multiple features to aid a high-quality Augmented Reality product. Also, it supports cross-platform app development. Onirix SDK provides various utilities and libraries that help the developers in fast and effortless app development for iOS, Android, and Unity.

Pikkart AR SDK enables the developers to develop AR games and apps that are lightweight on the device with detection and tracking features. The basic version of the Pikkart AR SDK is free to use and to get your hands on more advanced features, the developers can opt for the paid versions. This SDK offers a real-time up and running development process. The SDK is a great choice to develop highly immersive and creative AR experiences. Magic leap is a US-based startup that is backed by some huge investors such as Google and Alibaba. It ha been launched in 2018 and made available to the developers to develop AR apps and games. The Magic Leap One HUD superimposes 3D computer-generated images on real objects to provide a unique AR experience. Equipped with numerous components and scripts, Deep AR is an AR game and app development toolkit that will accelerate the development process. It is a lightweight AR SDK and it is very easy and quick to integrate with ongoing projects. The SDK is used to develop apps that use filters and facemasks like Snapchat. There is no need to say that Augmented Reality is becoming popular with every passing day, and it has a bright future in upcoming years. It is continuously developing exciting features with new tools and updates that inspire its users. Use the list above to choose the best AR SDK for your app or game, based on the features that each SDK provides.

At Capermint, our developers are working towards producing highly interactive and fully functional Augmented Reality applications. If you need any help with your AR project, or if you wish to develop an AR game and app from scratch, you can contact us.

Also, if you think we left out some deserving AR SDKs that should have been on this list, do let us know in the comment section!

Difference Between 2D and 3D Animation - The Complete Guide